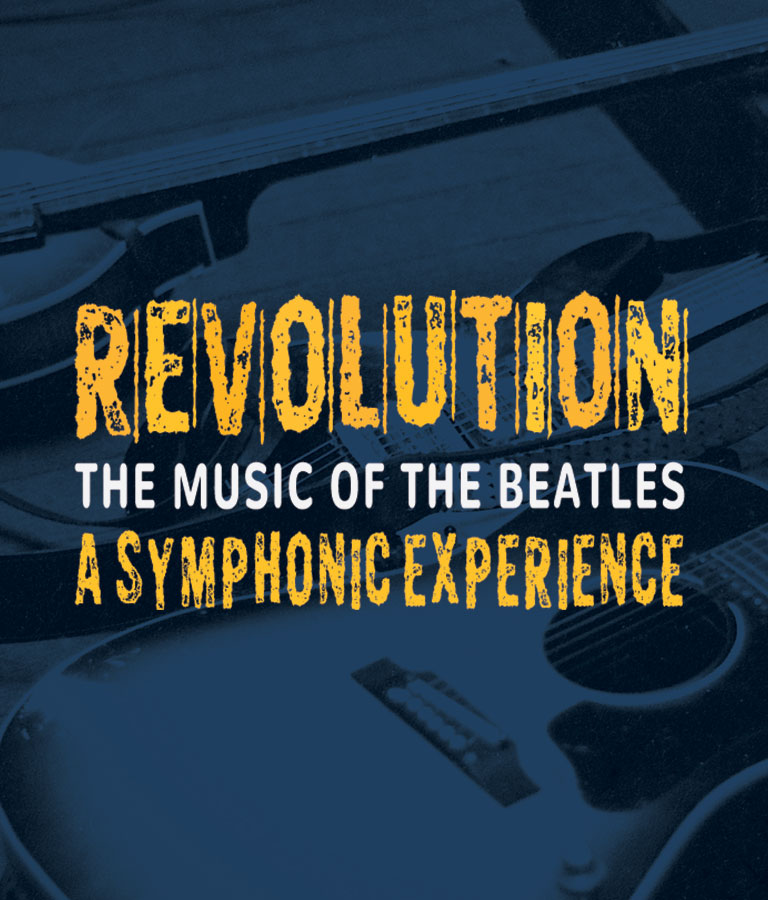 ACCLAIM FOR REVOLUTION “What made the concert so special was […]

“What made the concert so special was what wasn’t there. No 1960s Beatles costumes. No phony British accents. No imitations of John, Paul, George and Ringo mannerisms. No one asking on stage the outdated question: ‘Are there any ‘screamers’ here?’ It was just musicians on stage grooving to the best Beatles hits, doing it so well and in their own way while still faithful to the spirit of the songs. The audience members, old and young, needed nothing more.”
– David Hendricks, MySanAntonio.com

“THE BEST LIVE BEATLES EXPERIENCE EVER. . .”

THIS IS THE HAMILTON OF ORCHESTRA SHOWS . . .”

“What we set about was to find a new generation of artists who would be able to perform The Beatles’ repertoire at an extraordinarily high level. That was our mission.”
-Robert Thompson, Creative Producer,  Oklahoma Gazette

One of the most innovative and immersive explorations of The Beatles comes to life in Revolution,  a unique symphonic experience featuring six of the world’s top vocalists and musicians (who have collectively performed with The Who, Van Halen, Sheryl Crow, Journey, Alicia Keys, SNL, Christina Aguilera, Brendan James, The Temptations, The Tonight Show, Bernhoft, Bon Jovi, Sting, Elle King, The Moody Blues and The Four Tops, among others). Revolution also features restorative orchestrations made from the original sessions at Abbey Road, arranged by Grammy-winner Jeff Tyzik.  Accompanied by hundreds of rare and unseen photos from the historic, London-based archives of The Beatles’ official fan magazine – The Beatles Book Monthly – along with stunning video and animation, Revolution takes audiences on a magical musical and visual journey of The Beatles. The production features arrangements of over 25 top hits, including “Ticket to Ride,” “Penny Lane,” “Because,” “Get Back,” “Here Comes the Sun,” and “Hey Jude.”

In addition to the video and animation seen during the concert, Revolution also features pre-concert and intermission video showcasing even more of the rare and previously unseen photos from the historic archives of The Beatles Book Monthly, whose photographer was granted unparalleled, behind-the-scenes access to the Fab Four’s concerts, tours and legendary Abbey Road recording sessions. At select events, the limited concert edition of Looking Through You: Rare & Unseen Photographs from The Beatles Book Archive (a visual showcase of The Beatles told through 300 Beatles Book Monthly images and published by Omnibus Press) will be available for purchase, along with other official Beatles merchandise and limited print photos.

Revolution is a co-production of Schirmer Theatrical, LLC,  and Greenberg Artists. Twist & Shout, our second symphonic experience featuring the music of The Beatles, is also available! The production comes with all orchestral arrangements, six musicians, and two technical crew members (video and sound).

All music and imagery under exclusive license from Sony Music Publishing, Harrisongs Ltd, & The Beatles Book Photo Library to Schirmer Theatrical, LLC. This show is not endorsed by or connected to Apple Corps or The Beatles.

A portion of the proceeds from productions of Revolution: The Music of The Beatles. A Symphonic Experience are donated to the Penny Lane Development Trust (PLDT), a charitable community centre located in Liverpool, UK, that provides an engaging environment where people can expand and explore their interests.

Opened in 2010, “Penny Lane is not just any lane” with this Trust. PLDT offers Youth and Community Projects, each with their own aim, in addition to classes ranging from Pilates to creative writing. Youth projects are for young adults, ages 11-25, ranging from theatre and music productions to workshops in drug and alcohol awareness. Community projects create social opportunities for the local community through activities from armchair yoga to tai chi.

The centre also serves as a destination for Beatles-enthused visitors, featuring a “Penny Lane Gate” influenced by George Harrison, a “Wonderwall,” a “Sign Wall,” “Octopus Garden” and more. Since opening its doors to the community, the Trust has had an excess of 60,000 international visitors and provided services to over 20,000 local community members. The trust hopes to develop the site and gain heritage status, as in addition to the site being made famous by the Beatles, it was also the home ground to Liverpool Boys FC for 52 years; gaining heritage status would allow the Trust to pay homage to its roots as the Grove Mount playing fields.

To learn more about the Penny Lane Development Trust and the incredible opportunities they offer their community, please read more here or follow them on Twitter at @PennylaneDT.

Preview of ‘Revolution: The Music of The Beatles’ Live Performances

All music and imagery under exclusive license from Sony Music Publishing, Harrisongs Ltd, & The Beatles Book Photo Library to Schirmer Theatrical, LLC. This show is not endorsed by or connected to Apple Corps or The Beatles.